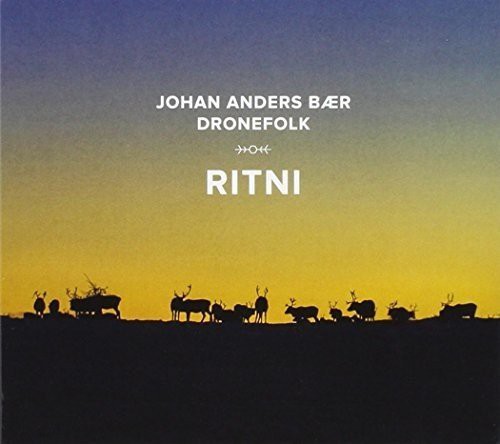 MELODIUS YOIKS ACCOMPANIED BY ENERGIC, ELEGANT, JOYFUL MUSIC
The yoik chanter Johan Anders Bær and the duo Dronefolk are presenting their new album Ritni (Frost).
Bær has composed new yoiks in traditional Sami way while Dronefolk, Buljo and Torjussen, give the ancient music form a modern and melodious backing.
The yoik is always central while the music is exploring different paths. Some directions point towards roots / folks, minimalistic rock or electronica while some hint at playful Americana with a touch of influences from African desert blues.
Several tracks are more ambient but keep focus on Bær’s vital and melodious yoik chanting.
Georg Buljo also produced Bær’s former solo album DATCD56 Verdde / Guest Friend (2010) but this time they have also invited Torjussen to join the project.
Bær and Dronefolk have given several concerts the last couple of years and and slowly developed a collaboration that finally ended in an album. It is recorded at Buljo’s studio Duippidit. “We have tried to the largest extent to do live recordings to keep a drifting and rough natural expression”, says Buljo.
Since 1992 Johan Anders Bær has released several albums, both solo and in collaboration with Nils-Aslak Valkeapää.
Dronefolk has a relaxed and humorous style. They play just as well rock clubs as in art galleries and enjoys being in a festival as much as in the music studio laboratory.