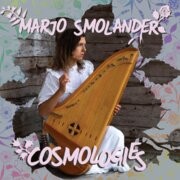 In the album “Cosmologies” Marjo collaborates with different artists from different countries. West Africa is strongly presented. The album was recorded in living rooms and standard recording studios across four different countries, Finland, Senegal, Denmark and Mali. The driving force behind the album was the exploration of musical communication between artists from different cultures and how emotions and stories were transmitted to people who have different cosmologies. The musical traditions of the different cultures represented in the album are presented in an inspiring and fluent way. Music is not just music. It talks. It comforts. And it nurtures.

One of the main themes of the album is motherhood “Many of the songs have been inspired by parenting – growing up with it and the associated contradiction and guilt about my own inadequacy” Smolander opens the album’s theme.

The album is a diary, a statement and a portfolio all at the same time. Rough and honest stories combined with surprising and beautiful arrangements bringing you inside Smolander’s musical cosmology.