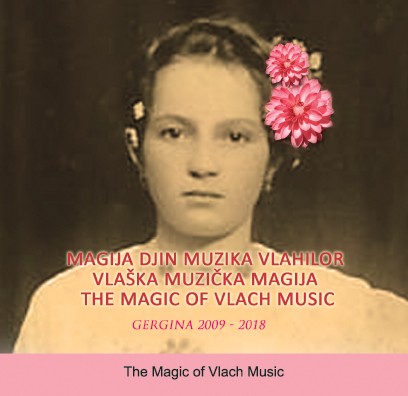 The Magic of Vlach Music
(a note on this edition)
This is a music story about the first ten editions of the Gergina festival. Fifty-one artists and groups, with their music, singing and repertoire, show us the splendor, diversity and breadth of the festival program that had been thought out and developed in the period from 2009 to 2018. These are performances from non-competition evenings, at which experienced music performers presented themselves, while young people from the competitive part of the program are not the subject of our compilation.
This double audio release was denied only for the material from the first festival, since our criteria regarding the technical quality of the recordings were not fulfilled.
The concept of the release The Magic of Vlach Music is based on the desire to show the festival’s diversity. To present “everything” meant to include recordings of both male and female vocal and instrumental soloists of different generations, as well as performers on traditional (jew’s harp, frula, duduk, bagpipes) and classical or modern instruments (clarinet, violin, accordion, harmonica, trumpet, saxophone). Although the festival, and therefore the compilation, is convincingly dominated by performances accompanied by an engaged orchestra – rare a cappella songs, singing with one or more instruments, as well as recordings of brass bands were also taken into account. What was also not forgotten was the contribution given to the festival by non-Vlach artists from our country and, at the same time, by representatives of the Music Production of the Radio Television of Serbia, as well as by guests from abroad (Romania, Bulgaria, North Macedonia and Denmark) – Vlachs or non-Vlachs.