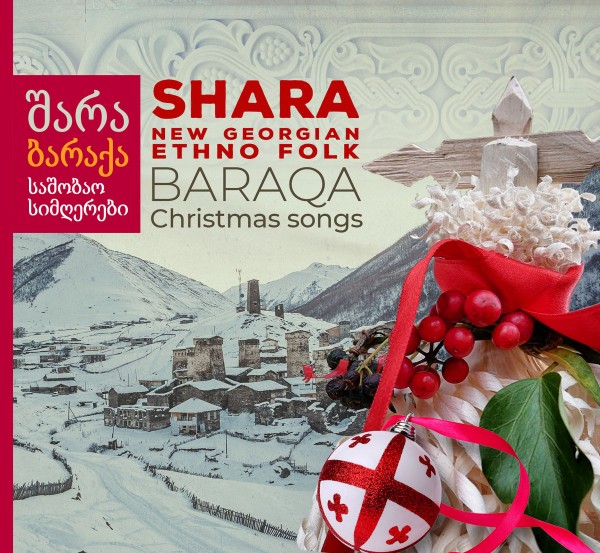 As a follow-up to its debut album „Kartiulia“ (2019), the Georgian band SHARA releases a christmas album – a fine collection of traditionals and a new arrangement of the classic „Jingle Bells“ in the famous Georgian polyphonic singing.

For a long time, the Republic of Georgia has been something of a hidden treasure. Being located at the border between Europe and Asia - the window from occident to orient - it developed an unbelievably rich culture that most people still to this day have only very limited knowledge about. Besides their unique language and their legendary hospitality, music is a uniting element in Georgian culture - the vocal part even a Unesco World Heritage.

SHARA, a band of 6 musicians and (at concerts) 4 dancers – is a very special group in a lot of ways. After their former band “Lakada” ended, founding members Giorgi Shanava, Giorgi Dzadzamia and the brothers Luka and Levan Mebonia added Irakli Chargazia and Shalva Tsivilashvili to the line up and met with famous producer Chabuka Amiranashvili. Together they developed a completely new approach to Georgian folk music and created an entirely new programme - GEORGIAN ETHNO FOLK.
Chabuka Amiranashvili wrote a lot of new material for the group but also drew on classical folk songs from the different regions of Georgia. But they didn’t stop there: For special occasions and for touring four professional dancers were added to the group which allows for a unique immersion into the songs and the stories that they tell.

After concerts in Lithuania, Germany, the Czech Republic, Russia, and, of course, Georgia Shara is already the most successful band in Georgia’s New Ethno Music scene. They performed at the legendary “Voices of Nomads”-Festival in Buryatia, Russia and a tour through Russia is currently being booked.
Apart from performing with SHARA, the vocalists are also Teachers of the special Georgian singing style in different parts of the world and are so keeping this tradition alive, which belongs to the UNESCO world heritage.

SHARA (which means “Narrow Road”) accomplishes something very rare: To combine the familiar with new and exciting sounds and visuals to create something that is by far greater than the sum of its parts: A total immersion into Georgian culture that captivates the imagination of the audience from the first note. Which was true for the debut „Kartulia“ and is no less valid for SHARA‘s christmas album „Baraqa“!